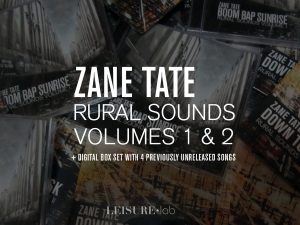 In 2007, Zane Tate released Boom Bap Sunrise: Rural Sounds Volume 1, a collection of sound explorations, mostly downtempo in style.  Over the next seven years, he produced a number of singles similar in genre, but progressing in concept: the cosmic “Not of this World” juxtaposed with the contemplative “Just Visiting,” and the groove-driven “The Last Resort.”  He flirted with Latin Jazz and House on “El Tiempo Es Circular.”  And then in 2014, Zane Tate released his second album Down to Dusk: Rural Sounds Volume 2, returning to downtempo once more, but this time more focused thematically.

Now, ten years after his debut album, Zane Tate presents this collection, a singular package containing every song ever released on his Leisure Lab label: both Rural Sounds CDs and a box set of all the digital singles.

Exclusive to Bandcamp, when you purchase Rural Sounds Volumes 1 and 2 on CD, you’ll receive a free download of the digital box set, which includes every digital single released on Leisure Lab plus the four previously unreleased songs.  As a special bonus, the digital box set includes liner notes documenting the story behind each song.

If you already have the CDs, dear ruralite, you can still get this package.  Simply share a photo of your discs on Facebook or Twitter and tag Zane Tate to receive a free download code.

Buy Zane Tate’s Rural Sounds Volumes 1 and 2 on CD now, and get a free download of all the digital singles released on the Leisure Lab label plus four previously unreleased tracks.